TORONTO — Schooners Sports and Entertainment (SSE) has announced new ticketing packages and pricing for the August 25, 2019 game between the Montreal Alouettes and the Toronto Argonauts that will kickoff at 1 p.m. AT.

Several major brands have partnered with the 2019 Touchdown Atlantic game to allow for new fan-friendly prices. Tickets will now start as low as $29, including all taxes and fees.

“Thanks to several partnerships secured in the past few weeks, and in listening to the region’s voice about ticket prices, we were able to work new price points for Touchdown Atlantic,” said Anthony LeBlanc, founding partner of SSE. “In following the CFL’s game-day themes which have shown immense success, we were able to put together family packages and a party zone area, as well as, bus transportation options to further connect football fans. We really want everyone in Atlantic Canada who loves football or just loves a fun event to join us and show the country what this region is made of.” 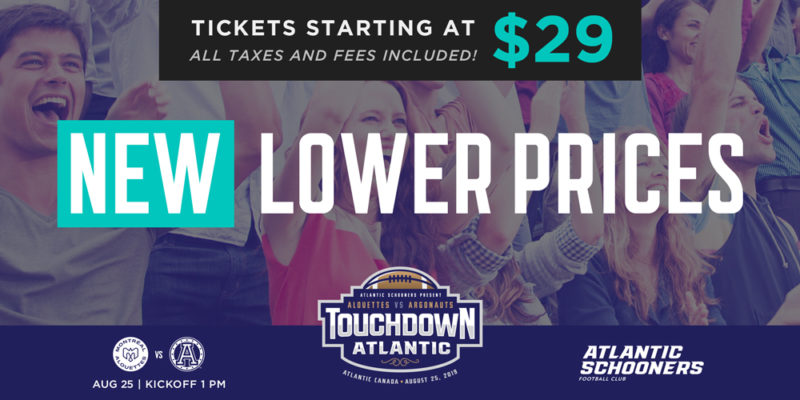 The New Country 96.9 Family Zone will offer picnic-style seating in the south end zone at an affordable price, with each $29 ticket including a hot dog and a soft drink.

The C103 Party Zone will take over the north end zone where fans can expect a celebratory and social experience, while making new friends from across Atlantic Canada. The wide-open, 19-and-over C103 Party Zone allows fans to roam the licensed area and take in the game atmosphere together, with tickets at just $45 each.

SSE also unveiled bus transfers in partnership with Ambassatours which will deliver fans to stade Croix-Bleue Medavie Stadium, located on the grounds of Université de Moncton, from Charlottetown, Fredericton, Halifax and Saint John.

Attached at the bottom of the release is the updated Touchdown Atlantic seating map with pricing.

All fans who purchased tickets in advance and are affected by the price change will be contacted by our customer service department within the next two weeks. At that time, fans may choose one of the following ways to be reimbursed:

Any fans who do not hear from our customer service department are invited to contact us at info@schooners.ca or 506-800-2443.

The 2013 edition of Touchdown Atlantic saw the visiting Alouettes take-on the Tiger-Cats. Hamilton rallied for a comeback 28-26 victory by outscoring Montreal 15-7 in the fourth quarter. The game was highlighted by a fake field goal pass for a touchdown, as well as, the pro debut of Truro, N.S., native Brett Lauther. The former Saint Mary’s Huskies kicker was perfect on four field goal attempts. Lauther is currently a member of the Saskatchewan Roughriders.

The 2019 regular season is underway and fans can stay up-to-date on all the non-stop action at CFL.ca; follow the 2019 season from around the world and join us at a game. The 107th Grey Cup presented by Shaw will be played at McMahon Stadium in Calgary on Sunday, November 24.