“We have heard from fans and partners that an afternoon start time is significantly preferred, and the reasoning has been simple yet powerful, the entire region of Atlantic Canada wants the opportunity to be at this exciting professional sports event. A 1 p.m. ADT start time allows the full region to come together for this great game.  I want to thank all the stakeholders who were able to accommodate this fan driven change”, said Anthony LeBlanc, founding partner of SSE. “It’s important to be able to allow families from across Atlantic Canada to come to a more fan friendly time on a Sunday afternoon rather than a Sunday evening, especially for those people travelling in for the football celebration.” 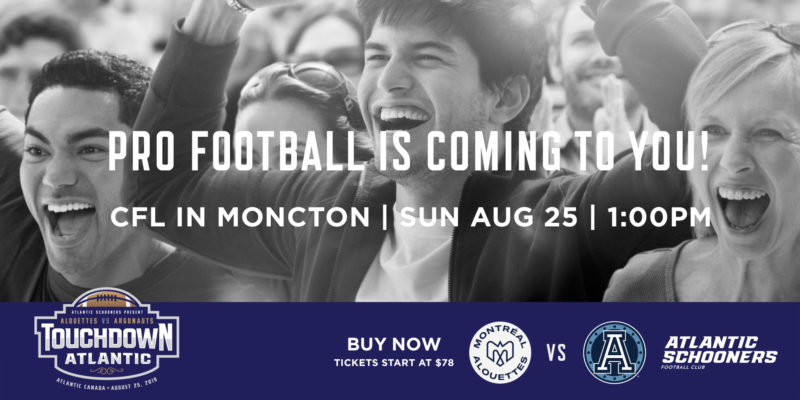 Additionally, SSE announced they have secured bus transfers from Charlottetown, Fredericton, Halifax and Saint John to bring fans throughout the Atlantic region to the Touchdown Atlantic game in Moncton. Details for transportation to the game will be announced in the coming weeks.

Tickets are on sale at Ticketmaster.ca starting as low as $78.

Fans can stay up to date with all the Touchdown Atlantic game and important reminders at Schooners.ca Fans can also follow the team on Twitter and Facebook.

The Alouettes were the visitors in 2013 against the Tiger-Cats. Hamilton rallied for the comeback 28-26 victory by outscoring Montreal 15-7 in the fourth quarter in a game where fans saw a fake field goal pass for a touchdown and the pro debut of Truro, N.S. native Brett Lauther. The former Saint Mary’s Huskies kicker was perfect on four field goal attempts. Lauther is currently a member of the Saskatchewan Roughriders.