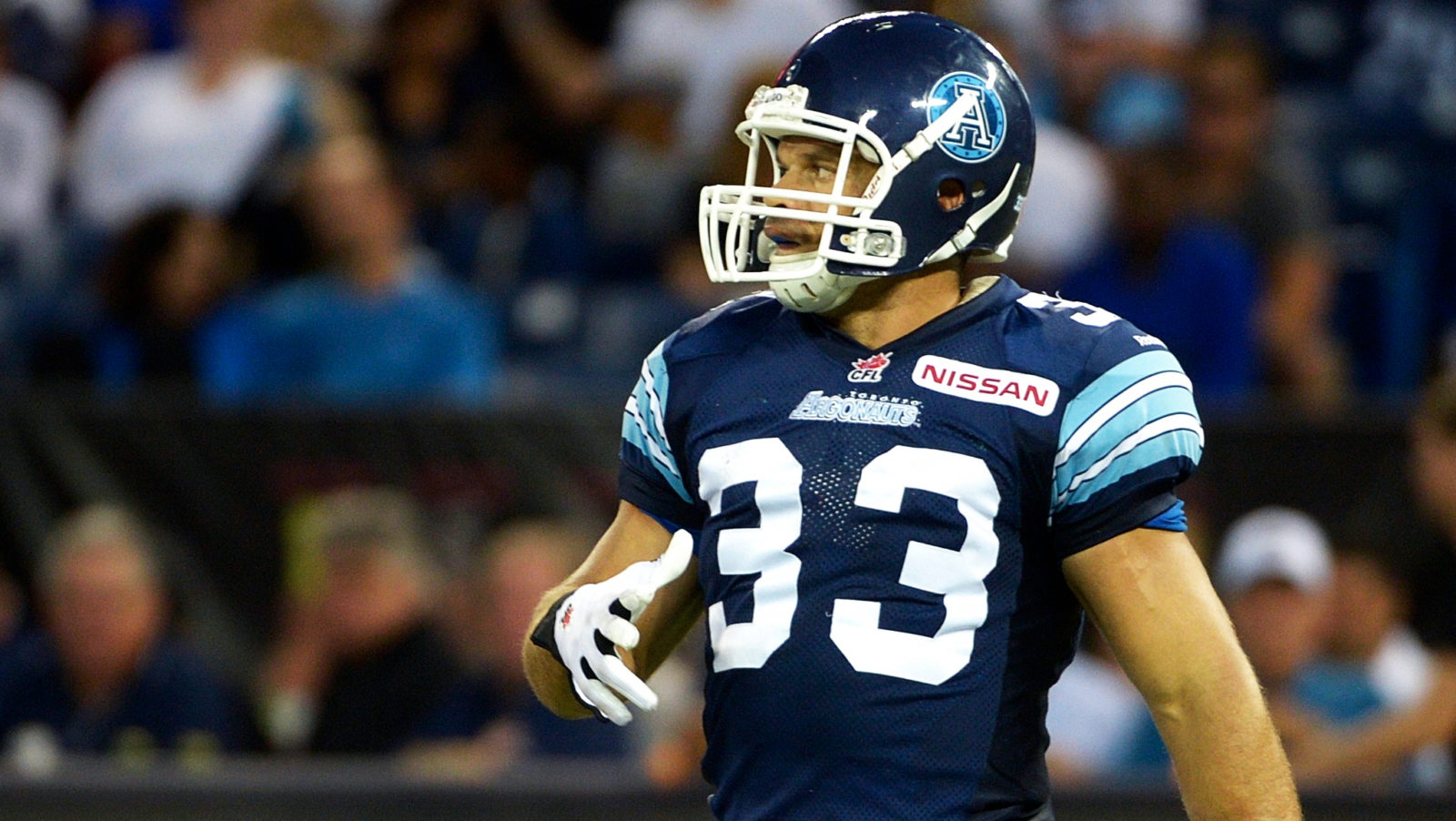 Almost a year into a new life on Canada’s east coast, Jeff Johnson is just about fully acclimated.

“The people here are first off some of the nicest people in the country,” Johnson, a 12-year Toronto Argonaut and two-time Grey Cup winner said. His job with Kinduct, a data and software analytics provider that works with a number of sports leagues in North America, led to him moving to Halifax last summer. The former fullback is Kinduct’s director of business development.

“I love my Toronto fans, no question. I got to play for them for 12 years, but there’s something about the Maritimes that is just different. Life is a little bit slower. It’s not as fast as it is in the Big Smoke. In Toronto, it goes non-stop. Here, it’s a bit of an adjustment process.

“When you’re in line at the Shoppers Drug Mart or the bank, there’s a conversation that’s going on between the customer and the teller whereas in Toronto there’s no conversation. It’s just in and out, boom. Thank you, see you later. Here it’s, ‘Hey, how’s Bob doing? How are the kids? How did it go at the soccer tournament?’”

It’s been the small things like that, knowing that the lineups may not be as big but they might take longer than you’re used to, that have been the biggest adjustment. Like anyone in new surroundings, he’s paid close attention to what he’s seeing. In studying the people around him, he sees them looking back at him.

Johnson leaps over an Edmonton defender during the Touchdown Atlantic game in Moncton, N.B. in 2010 (The Canadian Press)

He sees all of that and of course, being a 14-year CFL veteran, his mind goes to football. The Atlantic Schooners of course aren’t a full-on go yet, but Johnson thinks about what could be, about what a CFL team could do for his new hometown.

“The reason why athletes can be so good with the fans is that they’re still in the moment. They look people in the face and you listen to them and respond to them. There’s going to be a lot of opportunity for those kinds of relationships to grow on the east coast just because I think Maritimers are living moment to moment and are naturally engaging. I think that’s a unique recipe for something special.”

Johnson has had a couple of glimpses into what football could be like on the east coast. The first came in 2005, when the Argos faced the Hamilton Tiger-Cats in a pre-season game in Halifax. The second was in 2010, when the Argos faced Edmonton in the Touchdown Atlantic game in Moncton, N.B.

“They were fantastic. I remember pretty vividly that the community was very warm, very welcoming everywhere we went,” he said.

“Whether we were jumping in a cab or walking down the street to go for breakfast or lunch, we were talking with people constantly. They’d say it’d be great if they could get a football team here. I never heard anything negative.”

What he remembered from the two games and what he sees as a Haligonian today is the potential for accessibility.

“The really interesting thing about this region is that the pro athletes, the few of them that are down here, they’re accessible. The Sidney Crosbys and the Nathan MacKinnons, they’re accessible. It’s not hard to reach those guys, you know where they practice,” Johnson said.

“I love my Toronto fans, no question. I got to play for them for 12 years, but there’s something about the Maritimes that is just different.”

Johnson on what he loves about fans in Atlantic Canada

A couple of years ago, Johnson was invited to speak as part of a panel for an event with the Saint Mary’s Huskies football team. He was surprised then about the passion that the Huskies fans had for the game.

“Walking into the atmosphere at St. Mary’s with their alumni dinner there was a ton of pride,” he said.

“I went to York University and I loved it but at SMU there was another level of history there that I never quite experienced at a collegiate level. There was an air of intensity there that I didn’t experience in university.

“The new coach (James Colzie) was introduced and the first thing he said was he was walking down the street and some lady approached him. She said she heard he was the new football coach and she said, ‘All right, well you better start executing on that double-wing T option.’ She was referencing an option run and she was about 85-years old. He said, ‘I knew I was in a serious football town when this 85-year-old woman was calling me out for the offensive strategy that we’re going to be rolling with.’

“There is a football community here and it’s kind of scattered all over, which is a cool thing. The opportunity in front of the (ownership) group is that it could become an east coast thing. It’s not just about Halifax, it’s about the Atlantic region. I think there are a lot of football lovers here and I’m starting to see it more and more. It’s exciting.”

There are still a lot of pieces left to fall into place before the Schooners would become the league’s 10th franchise. But as Johnson, his wife and their four children continue to settle into their new home, he thinks about how football changed his life and how many lives it could impact in Atlantic Canada.

“There are unique characteristics to the game that no other sport has that can help all kids,” he said.

“I think it’s going to create a lot of opportunities for a lot of kids, should the team happen. It’ll lift all of those grassroots programs all across the province.

“If you’re around (the game as a kid) more, you begin to understand it more. Your level of engagement changes, then your level of skill and adoption change. That feeds to the support stream all around the team on the east coast which then lifts the level of the university programs.

“It raises that level and makes it a more competitive landscape at the U SPORT level. I totally see (a CFL team) parlaying into (a ripple effect) and creating a whole new community of fans.”