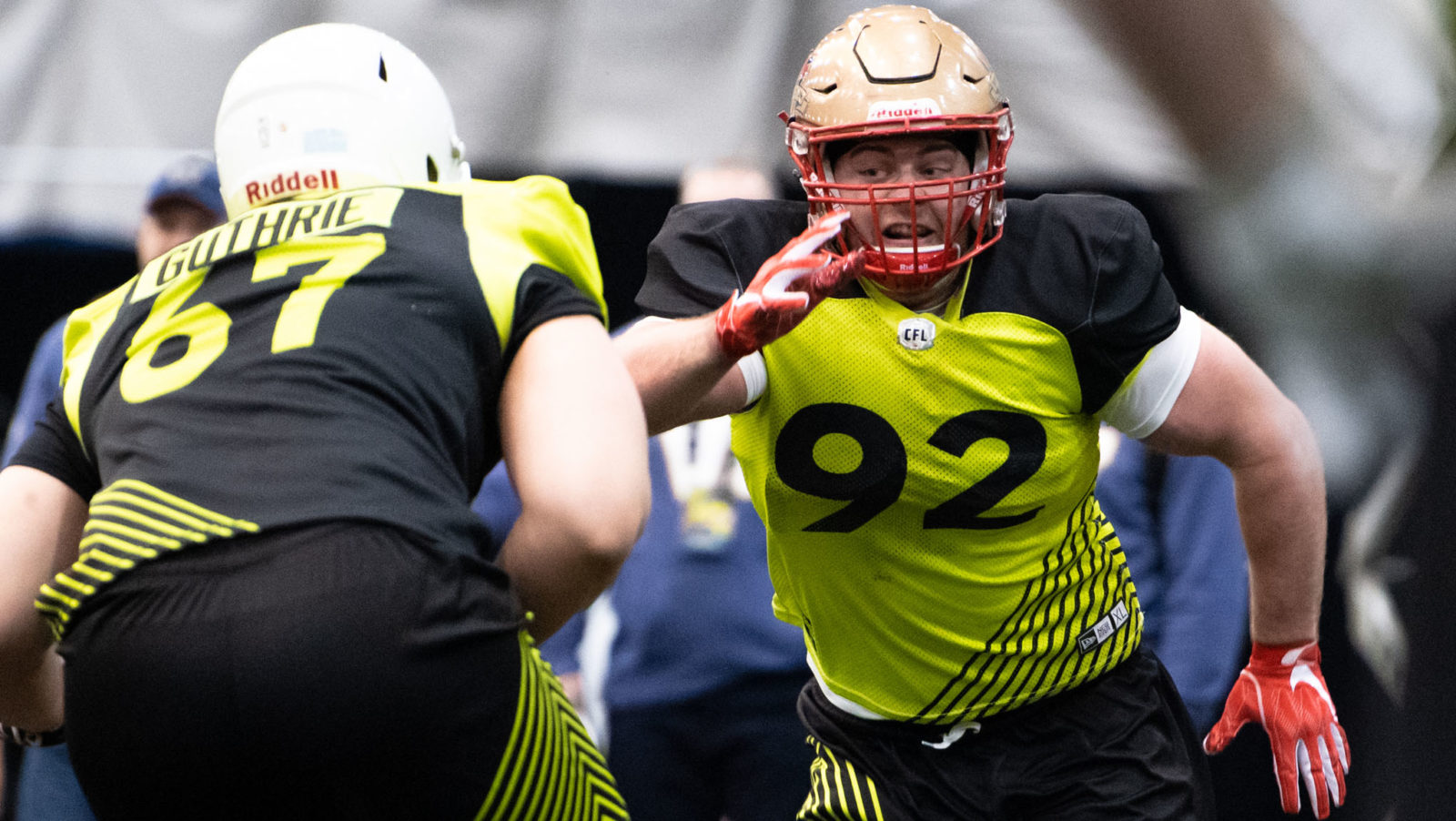 Scouts and general managers have a few more weeks to process the film and testing results they’ve gathered on the country’s top draft-eligible prospects. Then it’s time for the draft, as many of these amateur athletes find new homes on May 2.

The CFL Combine presented by New Era painted part of the prospect picture last month in Toronto. Who’s trending up and who’s trending down?

We start in the trenches:

Drew Desjarlais participates in a drill at the CFL Combine in Toronto (Peter Power/CFL.ca)

Desjarlais impressed me with his athleticism and overall approach to the National Combine. His footwork is above average, he’s solid on contact and has great hips. He’s easily in the top three when it comes to players who made the most of the National Combine spotlight.

Similar to Desjarlais, Gibbon showed everything you would want in a national ready to challenge for a starting spot. His film continues to be his most impressive asset with an ability to handle any type of pass rusher or blitzing linebacker at the U SPORTS level.

Not competing at the combine always hurts draft stocks but the massive, hulking Simba was called out for more than that during National Combine weekend with some in attendance questioning his durability and poor film against top RSEQ competition.

Richards is pictured before being sent home from the CFL Combine in Toronto (Peter Power/CFL.ca)

While his testing numbers aren’t great, his film and the system he comes from clearly shows that Thomassin isn’t going anywhere. Sometimes we misjudge players for the logo on the side of their helmet. That’s a risk I’m willing to take with Thomassin, who should go in the 20’s or 30’s at the latest.

He’s athletic, he has size, and he’s under the radar. For fans of U SPORTS football, Saxelid is off the radar as a UNLV product but don’t be surprised when you hear his name called early on May 2.

His one-on-ones were outstanding at both the National and Ontario Regional Combines but his background as an off and on again Gryphon has some wondering what they’ll be getting if Guthrie dons their colours in late May.

Desjardins is quick and explosive on the interior and has a variety of pass rush moves and the type of body you struggle to move off the point of attack in the run game. Consensus from those I talked to on combine weekend was that Desjardins deserves more credit for teammate Mathieu Betts’ high sack totals than he got during the season.

Robbie Smith impressed scouts, and Marsh, at the combine in Toronto (Peter Power/CFL.ca)

With great testing numbers, solid film, big-time production in his third year and an infectious personality, it’s impossible not to like Robbie Smith, who appears destined to leap into the first round and compete with Mathieu Betts for first national pass rusher to come off the board.

Some worry about his kind nature being a detriment in the daily grind of a rookie training camp but I believe that’s a poor character assessment. Don’t mistake the wise, smiling, thinking man for a fool incapable of using his natural talent to move bodies and get to the quarterback.

Betts didn’t compete at the combine – where I would’ve loved to see his freaky size and speed combo on display – and everyone was buzzing about his teammate Desjardins. It’s not always a zero-sum game but when love goes to someone near you sometimes it comes at your detriment.

I love me a good AUS defensive lineman with the type of body that screams CFL potential. Cunningham had that height and weight combo down but tested poorly at the Eastern Regional and now is on the outside looking in.

Griffiths is this year’s Connor McGough with a bit less burst and speed around the edge. Griffiths is everything you want in the CFL Draft process. He is not without his flaws but the total package is very attractive for teams and that hasn’t changed in the last few months.

From the Regional Combine level to the Nationals, LaChance is a CJFL alumni who has attended Bombers camp before going to Brian Dobie’s Bisons. LaChance is a bit of a sleeper for now but anyone who sees his raw length should see him as a riser quickly who might dip into the first half of the draft if the right suitor is found.

From junior football, formerly recruited by Blake Nill to UBC, Charles Nwoye is an athletic freak who posted a big broad jump number and appears ready to sneak up a teams draft board in early May. He’s raw, but that hasn’t stopped teams before.