Landry’s 5 takeaways from the Grey Cup 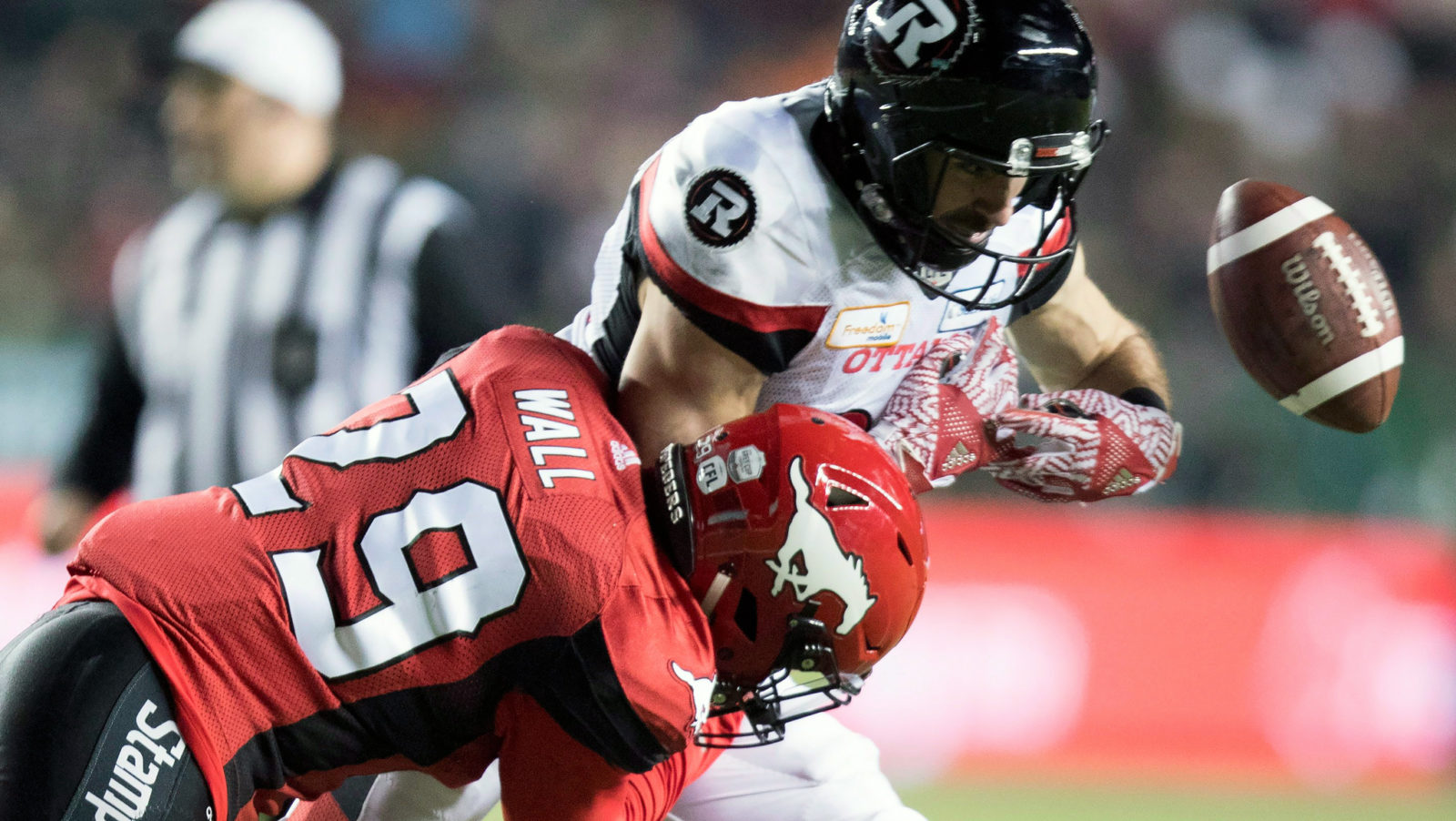 Landry’s 5 takeaways from the Grey Cup

Hello, Atlantic Schooners. One step closer to making things a reality, the long-held dream is alive. Alive and kickin’, I’d say, judging by the parties in the prospective team’s giant conference hall at the Shaw Centre, in Edmonton; a giant conference hall that was packed when I went in on Friday night. It was bursting with people, down East music thumping, and with an atmosphere that was exuberant and joyful.

Dare I say it? If this keeps up, the Schooners party could become an intense rival for the Spirit of Edmonton’s crown as THE party to attend, annually at Grey Cup. That kind of competition can mean only good things for party-goers of the future. Sociable!

Here are this week’s takeaways.

1. REDEMPTION. MY GOD DOES IT TASTE SWEET.

This takeaway’s subtitle: Joy and anger can go hand in hand.

After successive losses in games the experts said they were supposed to win, the Calgary Stampeders sure came in on a mission, one that they executed with great ferocity and determination when kickoff came.

All week long, the Stamps talked about completing the job and they seemed more insistent that they do it than fearful that they wouldn’t.
This was a team that had a complex personality during Grey Cup week. I mean, is it possible to be happy-go-lucky AND pissy at the same time?

Because that’s the vibe I got from them; enjoying the process, but also with an easily detectable, rushing undercurrent of “you WILL stop making fun of us on Sunday.”

And when zeroes hit the clock, the post-game interviews and celebrations showed you a few dozen guys who were pretty pleased that their insistence paid off, with a side order of residual grudge-tending present.

“Nobody either wanted us to win or thought we could win,” yelled a defiant Stamps’ veteran DB Brandon Smith, moments before the Grey Cup was presented to him and his mates.

It is certainly arguable as to whether the Stampeders were counted out by as many as they think – by far, most people I talked to picked them to win – but that doesn’t really matter when all is said and done. What matters is that it worked for them.

2. SELF-INFLICTED WOUNDS ARE THE WORST WOUNDS OF ALL.

The Ottawa REDBLACKS would’ve had a much better chance at winning this game had they not gotten in their own way so often. No guarantee they’d have come out on top, but they would not have been in a position where quarterback Trevor Harris had to try to force balls into coverage, in a scramble to try and salvage the thing, late in the fourth quarter.

Harris provided one of the early mistakes himself, throwing a pick a few moments after corner Jonathan Rose had bailed the team out with an end zone interception off Bo Levi Mitchell. Rose made his own mistake a little later in the first half, when he dropped what looked like an easy interception, one that may have allowed him to go the length of the field for a quick turnaround six. William Powell fumbled while in field goal territory, minutes after corner Sherrod Baltimore had swiped a Mitchell pass at midfield. Diontae Spencer turned it over deep in Ottawa territory when he knocked the ball out of his own hands, with his knee, on a punt return.

All moments that made things more difficult for the REDBLACKS. It’s tough enough trying to beat the Calgary Stampeders anyway, never mind adding to the challenge yourself.

3. JUST HANG IN THERE. THINGS’LL GET BETTER.

That’s the lesson taught to us by Lemar Durant, the Calgary receiver who had a case of the dropsies early on in the Grey Cup. Two easy balls were botched, falling to the turf.

And then, a Lemarvelous grab on a difficult ball, and a football-pretty dive to the end zone for Calgary’s second major of the game. Later on, a 22-yard rush on an end around, and still later, being handed the trophy for Most Valuable Canadian.

Early on, things can have it looking as though you’re doomed to a late evening of sitting in your locker stall, half-naked and dejected because you let your team down in another stunning loss. Instead, you’re one of the heroes of the night, rubbing your stinging, champagne-soaked eyes and pondering a winter of people stopping you and saying “way to go, man, what a touchdown!”

Keep at ‘er, whatever it is. Just ask Lemar Durant.

4. A REMINDER THAT WALL CAN BALL, Y’ALL.

Jamar Wall has seen it all for the Calgary Stampeders. Since joining the team in 2012, he’s played half, corner and safety.

This season, he was asked to bump up to strong side linebacker and he did so in the usual Jamar Wall style: steady, dependable, difficult to beat, without a lot of fanfare accompanying him.

If Jamar Wall often zips along under the radar during conversations about top defensive players, he showed again why his name ought to be right in the mix more often.

The Grey Cup game was still in doubt, late in the fourth quarter, because the Ottawa REDBLACKS were driving, poised to score a major and shave the Stamps’ lead to less than a touchdown, still eight or so minutes remaining.

On third and two from the nine-yard-line, Harris zipped one in to Brad Sinopoli at the four and it would’ve been first and goal from there if not for Wall’s perfectly timed hit on the sure-handed receiver. He jarred the ball loose, forcing a turnover on downs and adding to the steepness of the climb for the REDBLACKS.

The defensive play of the game made at a critical moment by a veteran who has been Mr. Everything for the Calgary Stampeders.

Is there something wrong with me? I mean, am I alone in this?

After all these years and all the changes to offences, the continual march of the evolution of play-calling, I still get completely jazzed about seeing a well-timed and executed screen pass.

That’s just exactly what Don Jackson‘s first quarter touchdown was for the Stamps.

The REDBLACKS rolled up a blitz, the Calgary offensive line held ’em up just a sec, and Jackson shuffled into no-man’s land just behind that
frenzy. When Mitchell looped a beauty of a rainbow overtop of the trench, Jackson turned to see nothing but green ahead of him and the TSN
panel’s booth off in the distance, beyond the back corner of the end zone.

Some things will never die with me. The perfectly executed screen pass is as pretty as a DaVinci, as everlasting as a Shakespearean sonnet.

The Reklaws pre-game mini-concert was a good one to be sure and when it was stretched out to include playing each team out with their football feel-good anthem, it got even better. Added some real flair to the guys sprinting out. Nothing wrong with just having a P.A. announcer amp up a high energy intro of a team, but adding that musical flourish really made the intros…ummm… sing.

I kind of want the Reklaws to be with me wherever I go, entering rooms ahead of me and breaking into that song, as I follow behind, waving
extravagantly.